Skip to content
Welcome to the fourth installment of our blog series “My Path to Google.” These are real stories from Googlers highlighting how they got to Google, what their roles are like, and even some tips on how to prepare for interviews.
Today’s post is all about Keawe Block. Read on! 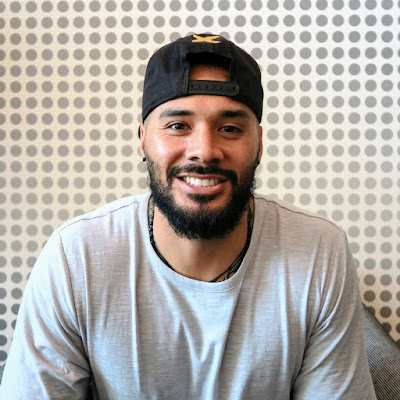 Can you tell us a bit about yourself?
I was born in Monterey, California, and was raised in a city called Marina, down in the Central Coast of California. My three brothers and I were all raised by a single mother. We never had much, but my mother always found a way to make sure we had enough.

I attended Long Beach City College and played sports year-round, specifically football and track and field. I didn’t have the best grades, but my track coach fought hard to get me into UCLA and after my 2nd year, I was offered a partial scholarship there. I eventually lost that (very small) partial scholarship, which left me unable to afford a food card or housing in the UCLA dorms, so I had to move off campus. During this time, I bounced around from sleeping on friends’ couches, sleeping on campus, and even sleeping in my car. I then had to take out more loans to pay for school, and somehow managed to make up classes and earn my degree in History with a focus on the colonization of the Pacific Islands in 2009.

I’m now married and have two beautiful sons. When I’m not working, I love playing sports with my kids, snowboarding, and am a passionate amateur cinematographer. Also, between my brothers and I, we’ve established a “Creative Collective” called “Hereaux” (HERO). We’re also working on establishing a non-profit that is focused on developing, mentoring, and keeping kids creative.

What’s your role at Google?
I’m currently a Channels Specialist Team Lead, focusing on diversity in tech. Our team was established five years ago, and I’ve been able to have the opportunity to work on/with this team since its inception. We focus on hiring underrepresented engineers in tech. One of the cool projects I’m working on is up-skilling our partners throughout Google on what my team does and how we can scale that to ensure that we’re looking for talent with the right lens.
What inspires you to come in every day?
I work with an amazing team, and coming in everyday to tackle the diversity issue within tech is beyond inspiring and gratifying. I’m extremely passionate about diversity and equal opportunity for all. I grew up in very diverse areas — Marina and Seaside, and Long Beach, where I went to junior college. When I first stepped foot onto UCLA’s campus, it was the first time I felt like a minority and began my interest and work on supporting/working with underrepresented communities. At Google, we’re tackling this diversity issue. We were the first to release our diversity numbers and the first to identify that we have a problem that we want to solve. So coming in everyday, knowing that my work is changing lives and changing the landscape of not only Google, but the entire tech industry, is very inspiring.

My mom has had the same job for 20+ years and has never once gotten a raise because she doesn’t have a degree. If I can help people who have non-traditional backgrounds get into Google, I get a sense of accomplishment doing what I wish someone could have done for my mom years ago.
Can you tell us about your decision to enter the process?
I’ve never in my life thought about applying to Google. When I graduated college in 2009, I had no idea what the tech industry was about and never even considered opportunities to be available at Google. I always looked at Google like some magic entity that was impossible to work at. My resume wasn’t impressive. I was unable to gain any viable experience because of sports, as well as me needing to take random jobs to support myself through school. All of this meant I wasn’t appealing to companies. I finally was able to get a job with a car rental company and worked there for about two years, but I was miserable and found myself depressed.

During that time, I had a friend that worked here at Google, and he wanted to put my resume in for opportunities. Again, I knew nothing about Google and didn’t think someone like me could work here. I continued to turn down his offer until one day I had a bit of a meltdown and knew I needed a change.

My decision to enter the process, even though I thought I’d never end up here, was the best decision I could’ve made. You miss 100% of the shots you don’t take. Just ask Wayne Gretzky.

How did the recruitment process go for you?
I called the friend I mentioned and asked him to put my resume in. Two weeks later, I interviewed, and a week after that I accepted an offer and moved my family up to the Bay Area. The job was for a recruiting coordinator position, which is an entry level role for staffing.

What do you wish you’d known when you started the process?
I wish that I understood more about Google, the tech industry, and how staffing/recruiting works overall. I came into the interview process and into Google extremely green. Growing up where I did and enduring the struggles that I did, thinking beyond what I initially thought I could accomplish wasn’t something I was used to doing. I was a product of my environment and while I aspired to be successful in life, I never took the time to invest into what I assumed was impossible.

To finish, do you have any tips you’d like to share with aspiring Googlers?
The tech industry overall, and especially Google, is changing in many ways. What we historically looked for in candidates, the “traditional backgrounds” is becoming a thing of the past. There is a large emphasis on diversity in all aspects. Demographic diversity, diversity of thought, of experience, of background, etc. We understand now more than ever, that we need to look beyond what we know will work, in order to find true talent. We’re focused on ensuring that our workforce is representative of the communities that we operate in and that isn’t a staffing-only goal; it’s a goal for all of Google.